The project’s brief was to enhance the home’s connection to the Derwent River and provide a flexible living space.

The arrival through narrow laneways lined with tightly packed shacks all jostling for position, coupled with the house’s mute and modest façade, hides the connection with the Derwent River. However, once you enter, the river is uncompromisingly revealed through full-height glazing that stretches the width of the rear elevation . An expansive deck, running the full width of the house, draws you out to the edge, closer to the view.

It is not until you have been to the edge that you turn back. You then find the kitchen, tucked neatly beside the entry, and the master bedroom suite adjacent the dining, concealed by a sliding plywood screen.

The flexibile plan allows the house to be used in different ways.

If not required for sleeping, the master bedroom suite can be opened fully, increasing the living space.

Another bedroom suite to the rear of the kitchen, behind a sneaky hidden door, opens to a north-facing private courtyard.

Tas Oak and simple detailing provides an honest and contrasting base for the owners’ furniture collection.

Sustainability is imperative as the house operates 100% on harvested rainwater. The new xeriscape landscape requires little watering and maintenance. 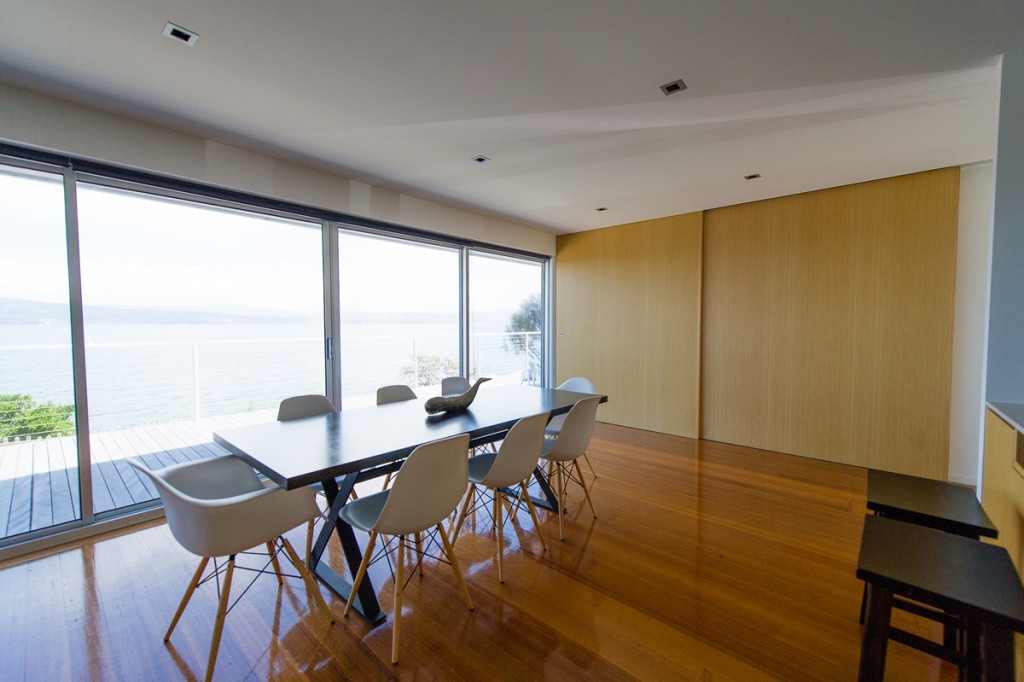 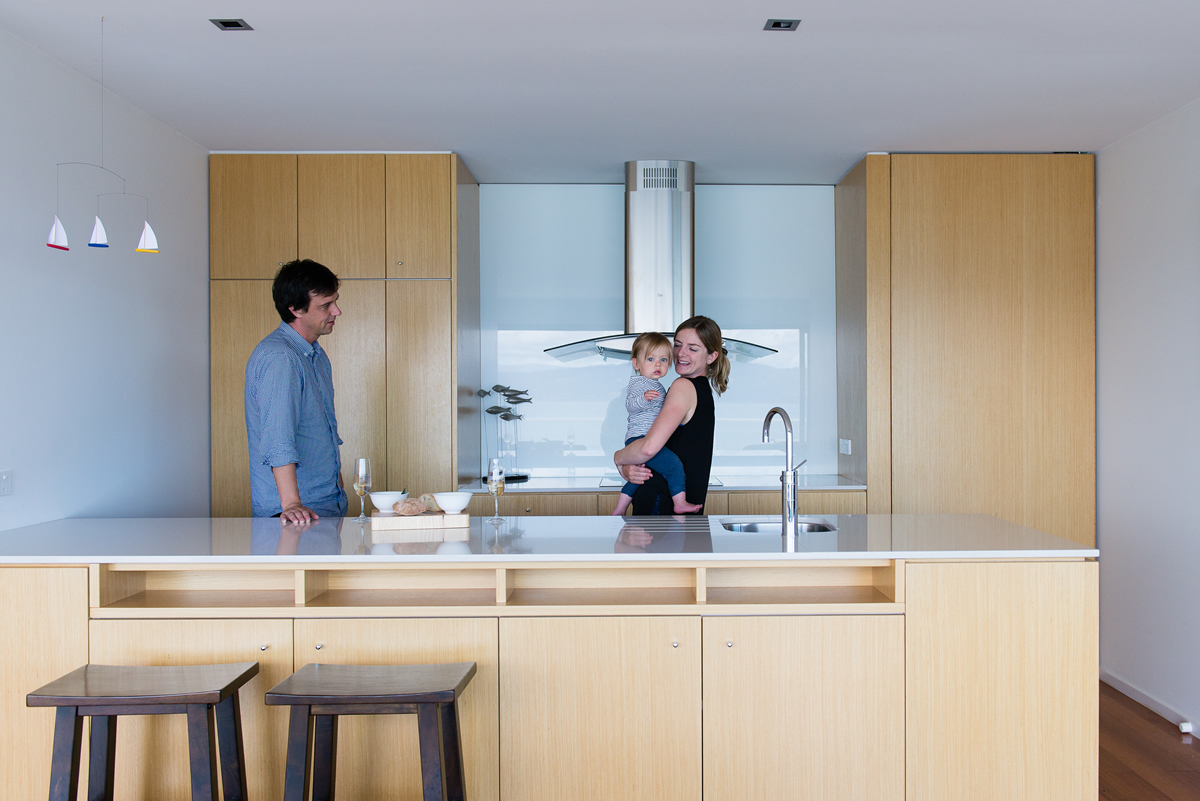 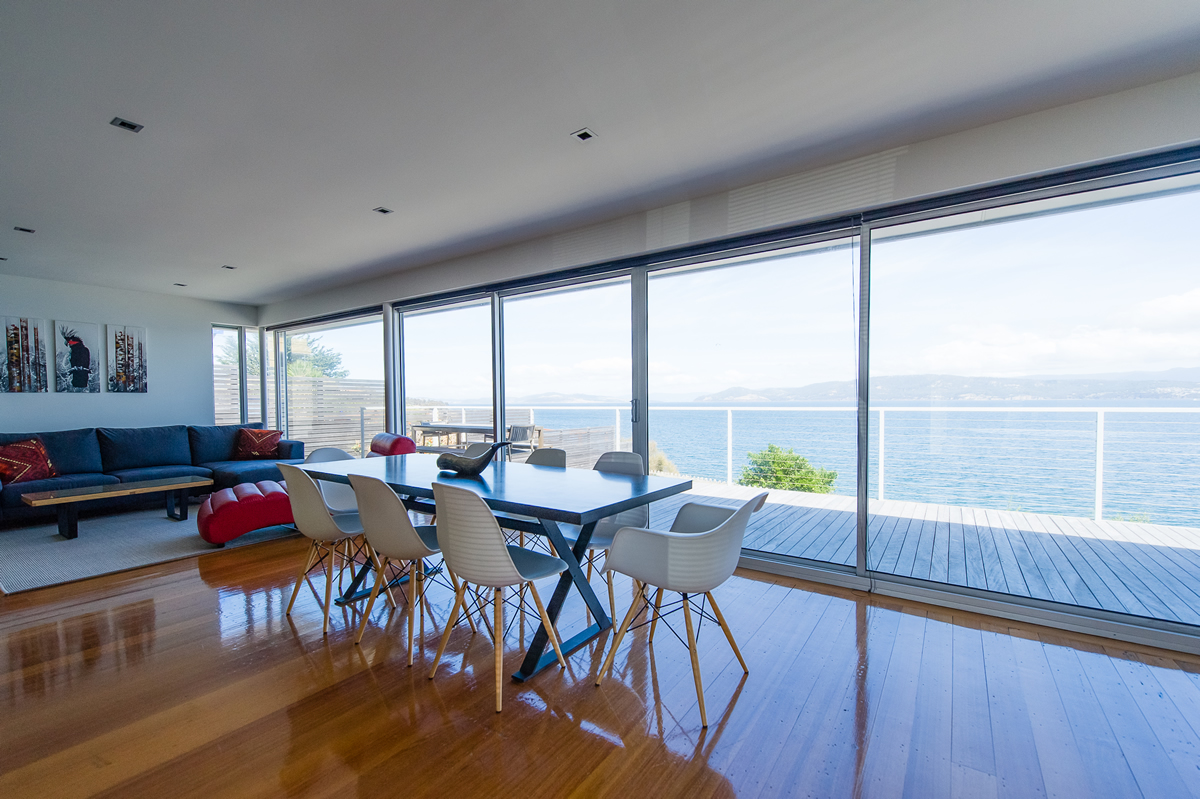 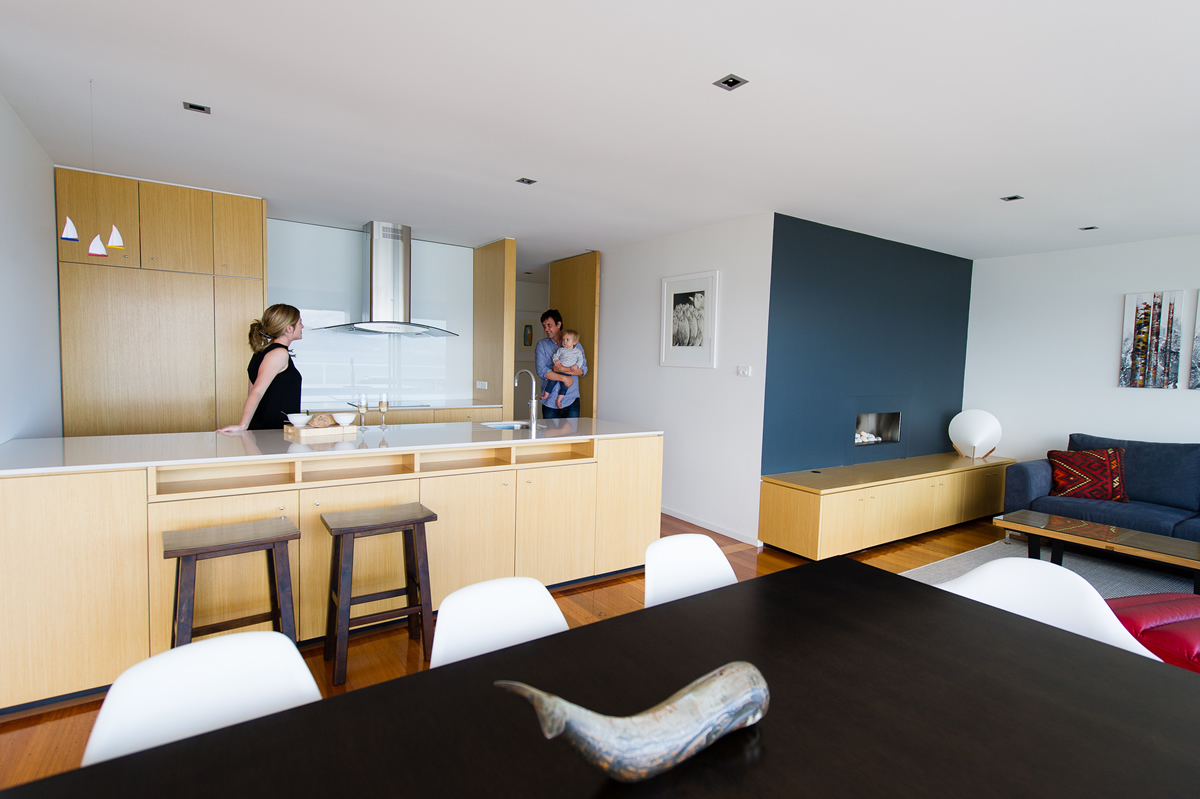 Located in the inner city, this modest project is the first stage required to transform a 1900s workers’ cottage into a modern family residence.

This project is an example of how an ordinary residence, built modestly and of its time, can be easily and cost-efficiently adapted to serve a new generation of owners’ needs and aspirations without significantly altering the streetscape.

Stage 1 involved the refurbishment of the existing cottage in preparation for the Stage 2 extension.

In addition to simply refurbishing the existing building, the project included a new screen wall which reclaims the front yard as a sunny, semi-private courtyard, and creates a transition zone between the dwelling and the street.

The delicate timber screen wall mediates between privacy, security and openness. It provides a hint of the house’s presence in the streetscape, while filtering the occupants’ activities through its diaphanous skin.

Internal spaces have been stripped back, repaired, and unified with white paint finish. New doors between the veranda and the front room connect the interior and the courtyard. Fixed storage, which draws on the house’s original features, has been inserted into the chimney reveals. New pieces of loose joinery, smaller in scale and finished in Tas Oak, share similar details.

The landscape was designed to require little watering and maintenance. 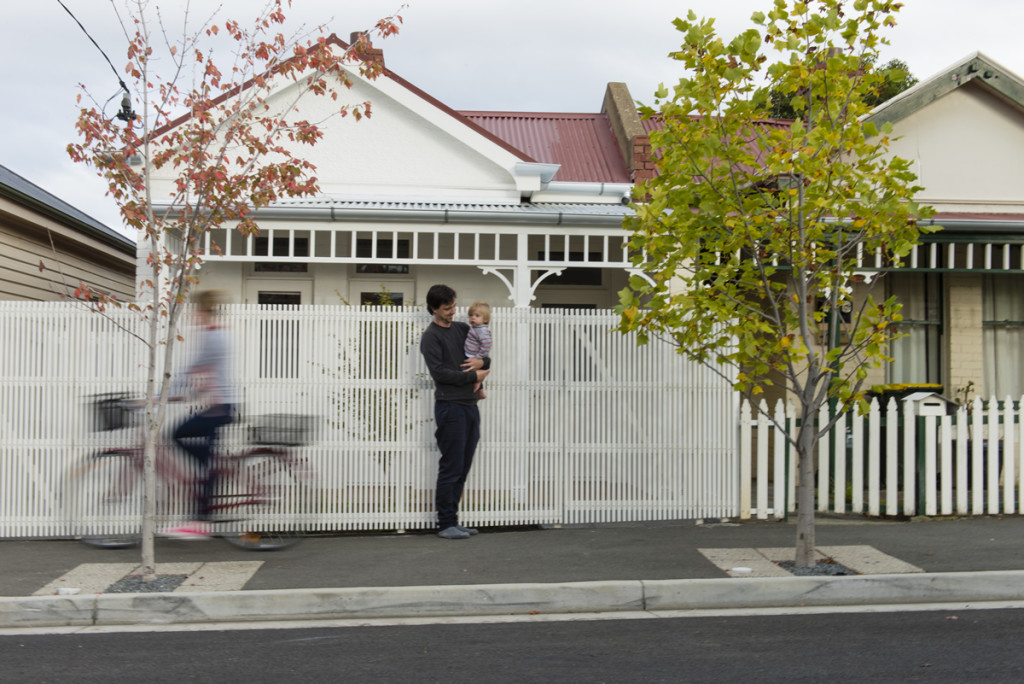 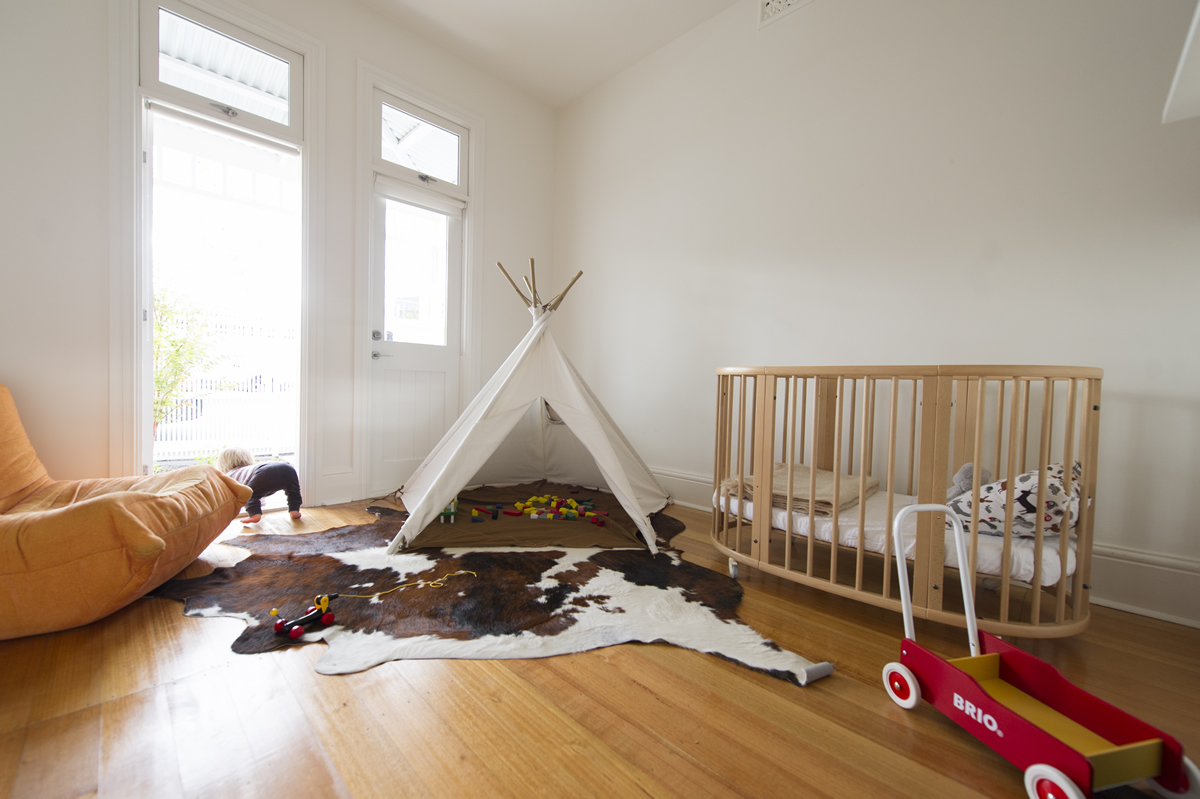 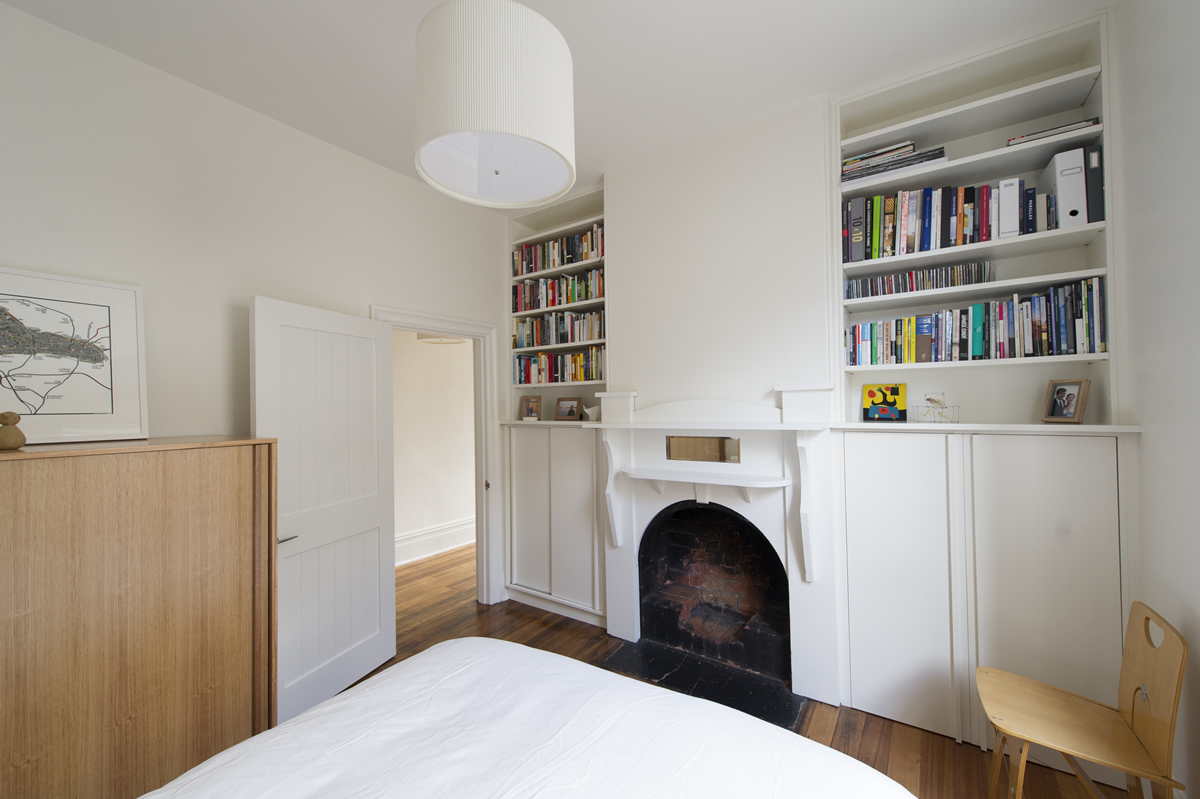 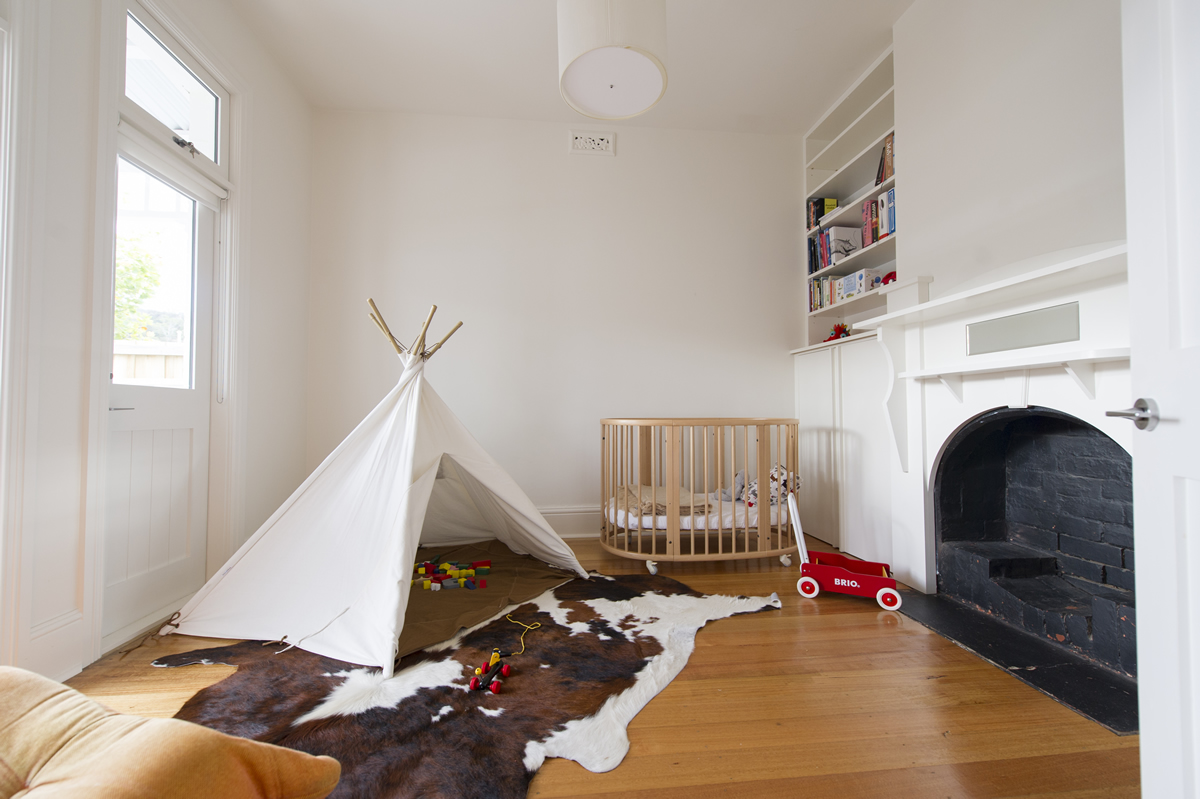 Providence Rivulet once traced a path along the present day Newdegate Street. One of the first European settlers to be attracted to this fertile little valley in 1882 was William Shoobridge, a pioneer of the Tasmanian hop industry. Along with hops the area was characterised by small family farms, orchards and market gardens.

Nearly 200 years later the streets above the now subterranean rivulet bubble with friendly neighbourhood activity, while the smell of hops has been replaced by fresh coffee and food.

Bence Mulcahy’s office is located at Level 1, 42 Newdegate Street above the Providence Cafe. We are happy working away in our sunny studio with the hustle and bustle of cafe life and the view of the mountain’s summit serving as gentle reminders of community and place. 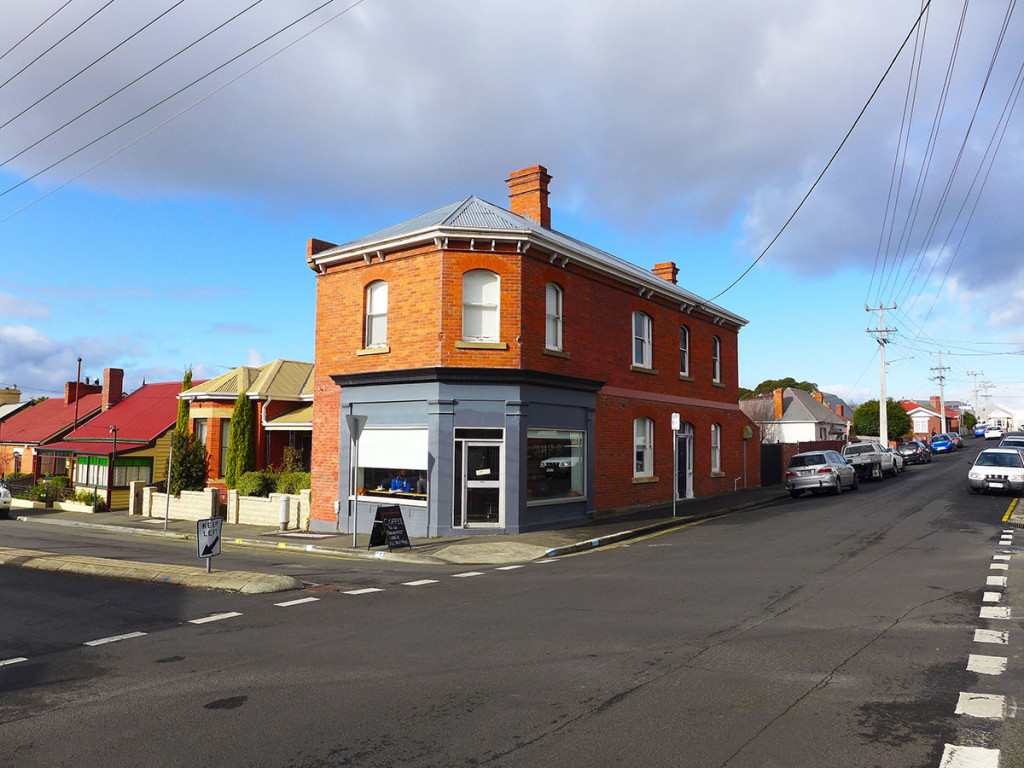 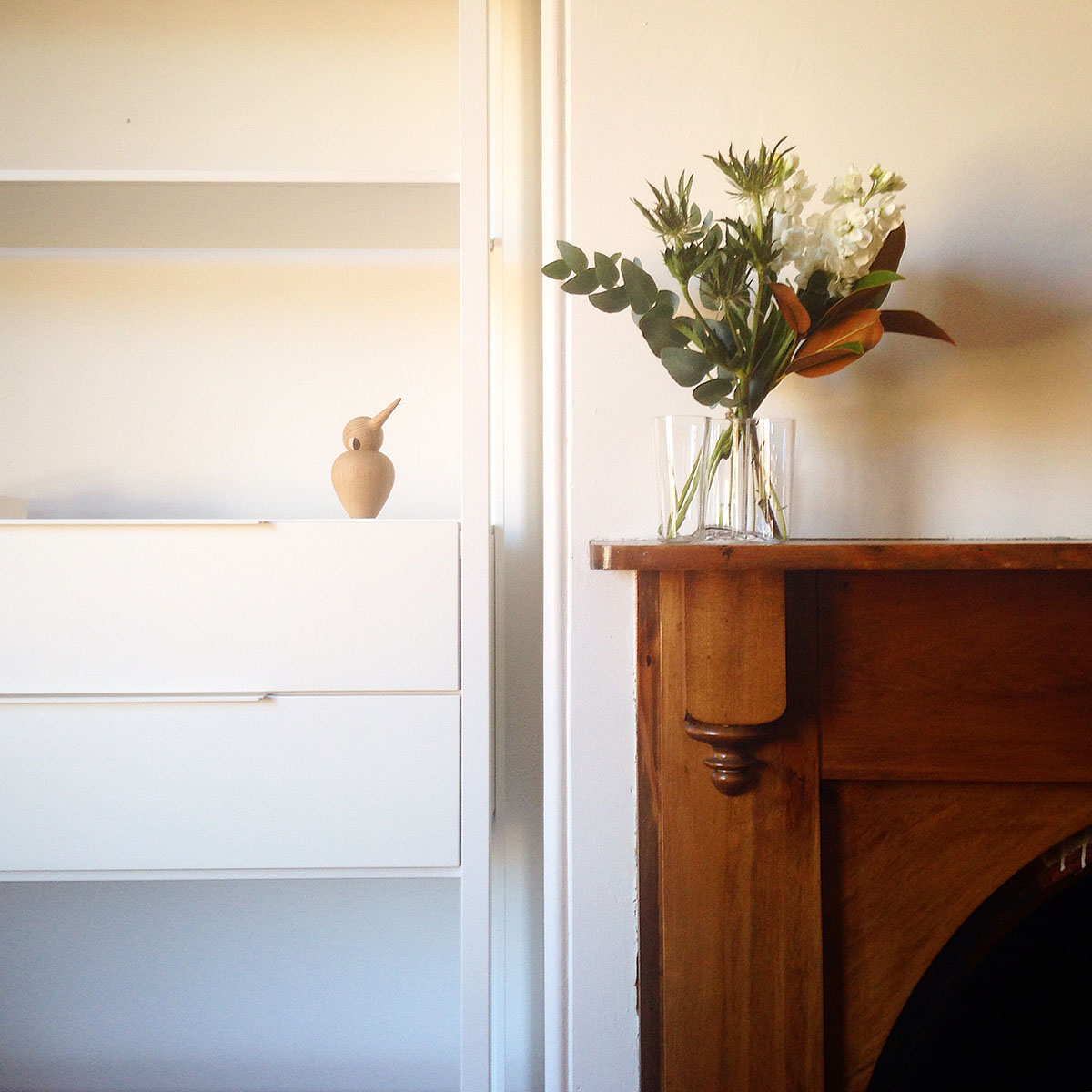 Our sense of belonging to Tasmania deeply influences our practice and philosophy.

The varied, beautiful landscape of this state, and its strong sense of community, has instilled in us the belief that every project has a responsibility to its physical, social and cultural environment.

Isolation is a virtue, we believe: it fosters creativity and curiosity. It encourages ingenuity, and interest in both ‘here’ and ‘elsewhere’.

This is at the heart of who we are and how we work. We engage both our clients and the broader community. We examine a project’s possibilities and push the boundaries. We create unique and distinctive buildings that make a difference. 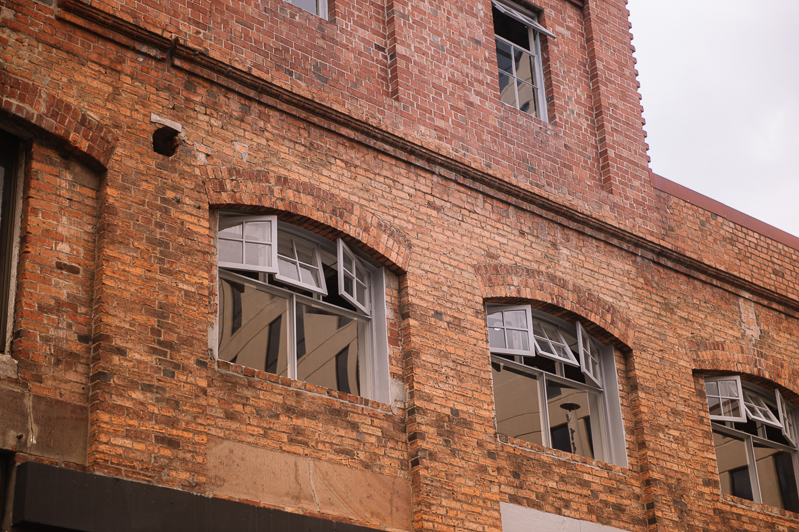 We believe great design shapes our engagement with one another and the world around us, and that architecture should be driven by a spirit of generosity. We are interested in global ideas applied to the specific context. 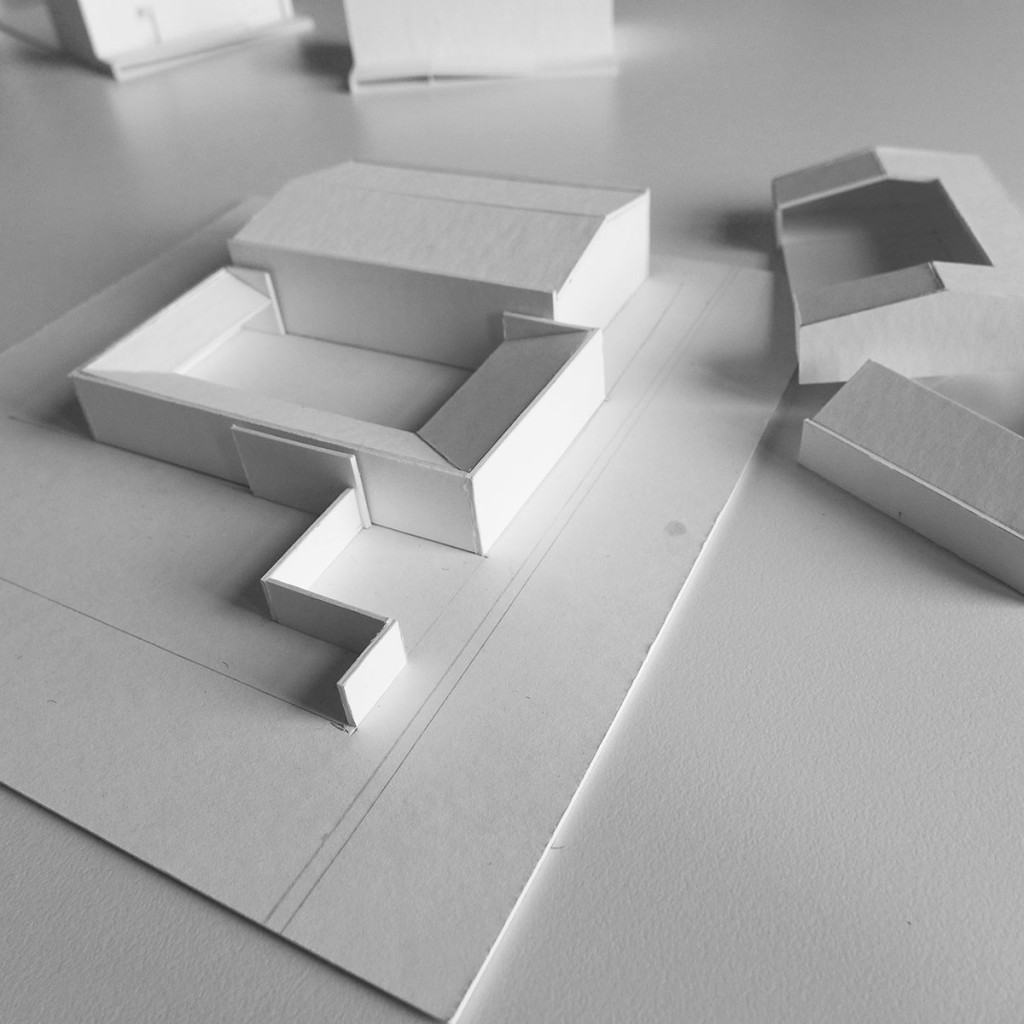 Sophie and Shamus’ decision to found Bence Mulcahy grew from their shared commitment to great design and desire to work with clients on projects to be proud of.  We formed Bence Mulcahy in 2014 after first collaborating in 2010, and were joined by Bek Verrier in 2017.

Our projects include new houses and extensions to existing houses, heritage renovations, commercial buildings, tourist accommodation, masterplans, and projects in the health and education sectors.

Sophie’s career kicked off with a crayon drawing of her dream house when she was 5 years old. As she drew house after house, two things became clear: she was obsessed with walk-in wardrobes and with the quest for the perfect house, suited to its people and place.

Sophie graduated from the University of Tasmania in 2003 and took up a position at Terroir, where she worked on a number of highly detailed and tailored projects including the Liverpool Crescent House, and the Cataract Gorge Master Plan and Basin Café. In 2010, Sophie moved to Liminal Studio, and was made an Associate in 2012.

Shamus grew up on Tasmania’s North West coast, where the region’s isolated towns – each with a unique identity and fluctuating social, cultural and economic circumstances – had a profound impact on his views on community and architecture.

Shamus graduated from the University of Tasmania in 1997 and spent the early years of his career with Melbourne’s H20 Architects, working on projects including RMIT Textiles Brunswick and the SES Headquarters in South Melbourne.

He returned to Tasmania in 2001 as Associate Director for DesignInc, where he was part of the team behind a number of award- winning projects, including the Woodbridge House and Dominic College Chapel.

In 2008 Shamus moved to London to work as Senior Architect with Denton Corker Marshall on the 2012 London Olympic Village. He returned to Hobart in 2011 as Associate Director of Liminal Architecture.

After gaining a reputation for hogging the easel at childcare and spending hours building homes with her Duplo set, it was no surprise when Bek committed to a career in architecture at an early age.  After graduating from UTAS with first class honours in 2011, Bek joined Preston Lane Architects where she worked on a number of award-winning projects. She was named Tasmania’s Emerging Architect in 2016.

Bek’s energy and passion for architecture is infectious.  She co-founded the Tasmanian Women in Architecture Group and is an active member of the Australian Institute of Architects. Her artistic skills extend to ceramics, weaving and garment production and she loves to ‘get on the tools’ renovating, building and painting.  Bek enjoys finding the fun in projects, whether it’s during the process of collaborating with clients, or in creating the delightful small-scale details that give a design that special something 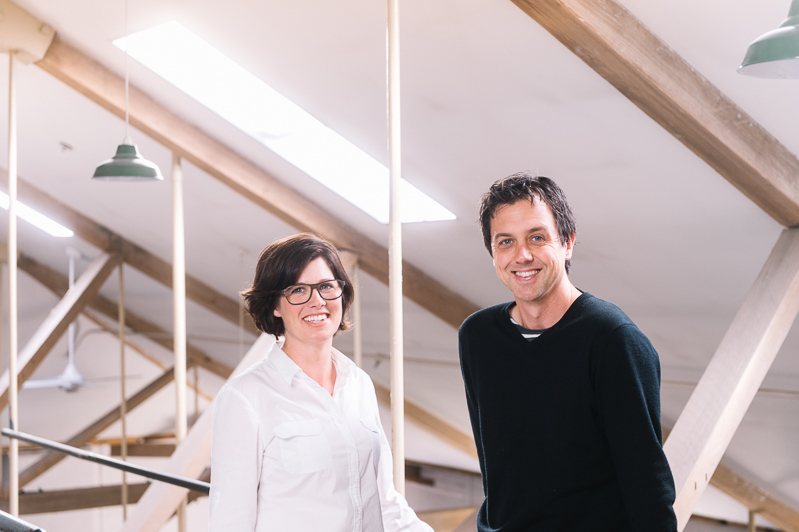